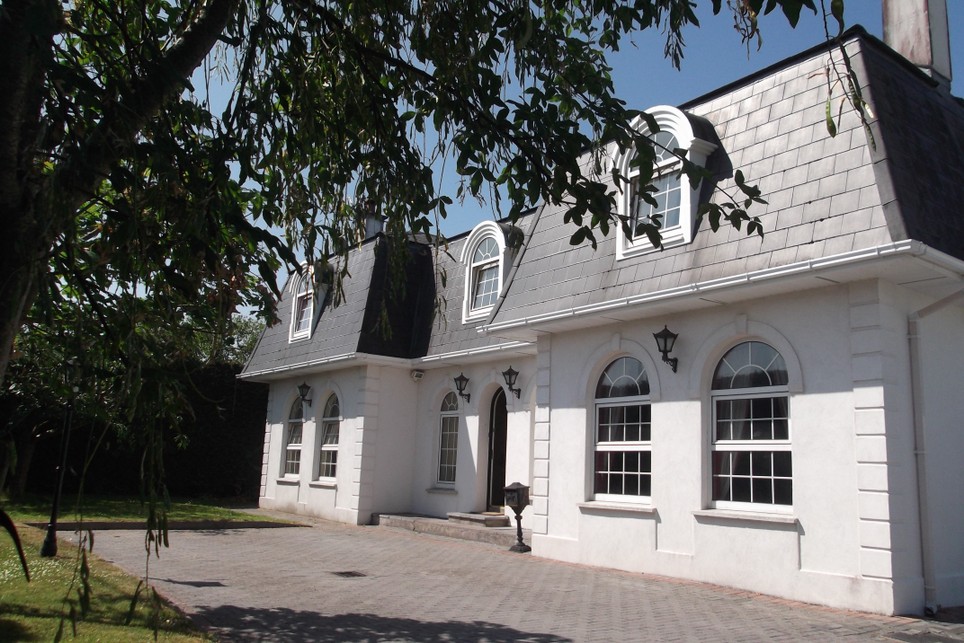 This is a lovely big and elegant family home in a sought after mature residential area which is close to all amenities and within an easy walk of Blackrock and Douglas Villages.

By Tommy BarkerCalled after the rather chic Normandy, France seaside resort of Deauville, is this mansard-roofed detached Blackrock family home, a spot that aims for a slice of the real Deauville’s villa grandeur.

Designed by its owner and built 17 years ago on a Church Road, Blackrock, site bought from a local landowner, it’s now for sale for the first time in its existence, guiding €660,000 — “and getting early interest already around that sum,” says estate agent Tom Woodward.

Deauville’s distinctive in several ways, most notably for its broad top-hat of almost vertical mansard slate roof: appropriately, the mansard is a typically French roofing style, giving good floor area for what, in effect, is a dormer, with windows in the roof section. Also distinctive here are Deauville’s many arched windows and doors.

Internally, despite having about 3,500 sq ft, that’s not been spread across a large number of rooms. Rather, it’s shared between an almost standard-sized home’s range of rooms, albeit many of them writ large, with hall, stairs and landing a bit of a core feature.

Biggest room is the 32’ by 14’ drawing room, a front-to- back reception space with period trimmings, from its ornate plaster ceiling work and chandelier (plus some recessed spots) to a Victorian cast iron fireplace off-centre, towards the front.

This big room’s floored in oak, has two access points, and four arched or domed windows on three sides, richly swagged and draped. This great room is graced by a black baby grand piano, and could as easily take the full sized instrument, or even fit in a Deauville-style chamber orchestra — who’s soiree now?

Across the 18’ wide hall is a good-sized (14’ by 14’) sitting room, also with fireplace, and oak floors, there’s a formal dining room, and off the kitchen/breakfast room is a tall sun-room, a rear of house extension, with glazing on three sides, plus two roof Veluxes set into pine-sheeted cathedral ceilings.

The kitchen’s surprisingly compact for a house of this size, with units actually taken out to open up the space as much as possible (there’s also a utility) plus guest WC.

The feature staircase, in hardwood, splits left and right on the return for a sort of Belle Epoque sojourn in the southside suburbs, and the landing wrapping around is massive, with space in several quarters for a home office or library. Off it are four bedrooms, two of them en suite, with plinth-raised Jacuzzi bath, bidet and separate shower cubicle. The main bathroom, meanwhile, has a stand-out double ended roll-top bath.

Deauville’s on pretty private grounds of one-fifth of an acre in the middle of Church Road, opposite the Rockies GAA heartland with modern clubhouse and pitches, and there are public parks and walks nearby, as well as a tennis club.

It’s got lots of off-street parking in front, two side gardens, one enclosed for utilities, the other larger and lusher (with beech tree arch, over a cast iron garden seat) and a quite shallow back garden, with the sun room and adjacent decking/patio in pride of place.

While most of the house’s look and decor leans towards the classical, the rear connected kitchen/breakfast and sun-room is more contemporary, with porcelain tile floor, with cream and walnut kitchen units. If new owners want to keep with the classical look, it’ll be handy then that the house’s selling agent Woodwards are also antique auction specialists. 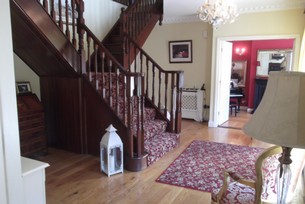 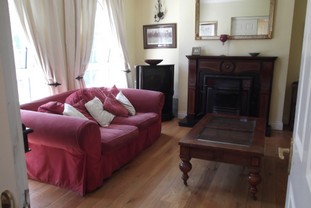 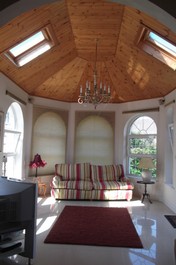 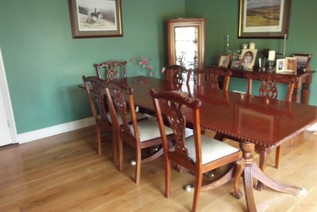 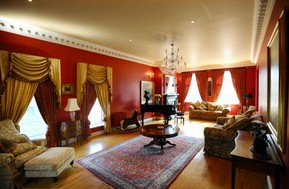 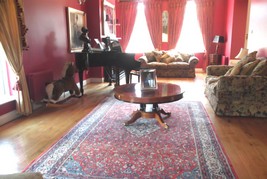 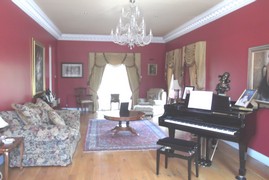 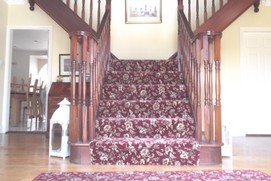 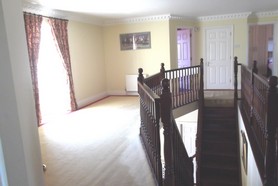 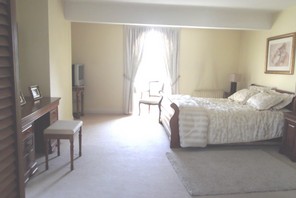 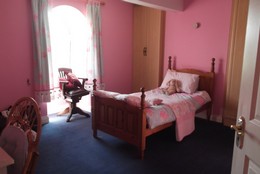 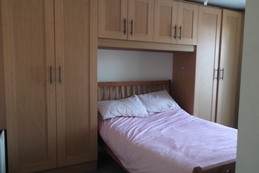 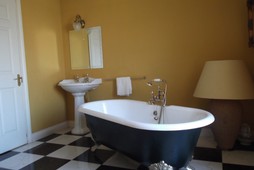 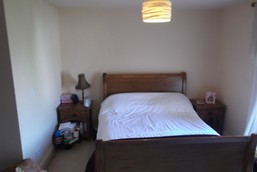 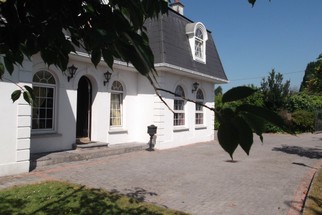 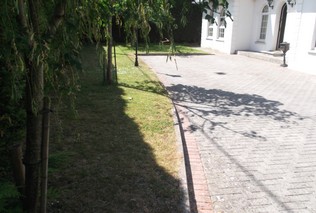 Outside: The house is set in a lovely private site of c 1/5 acre and is approached through ornate serpentine wrought iron entrance gates to a paved driveway with garden laid out in grass lawn with high hedged borders and outside lighting. Flower beds with trees and a profusion of shrubbery. Stone flagged steps to front door. Side access. 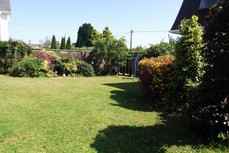 At rear and to the sides is a lovely garden laid out in grass lawn with a profusion of shrubbery and trees, pergola, raised deck area and lighting.
Walled and hedges borders. 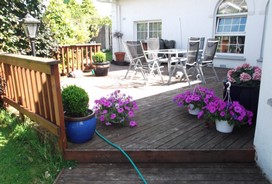 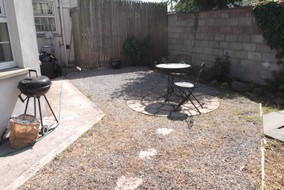 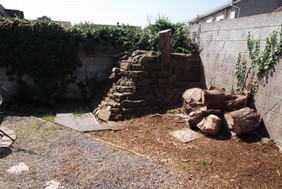 Gravelled and paved barbeque area and a lovely water feature with southerly aspect.
Security lighting and recessed lighting in eaves.

We have no hesitation in recommending the sale of this fine family home which features a lovely elegance and large airy rooms throughout combined with a comfortable ambience.  The hallway opens up as you enter the house and the Kitchen and conservatory together are the modern elegant central focus of the busy family day.  By contrast the Drawingroom reminds of a quieter bygone era when life operated at a more refined pace and it offers a peaceful relaxed stylish atmosphere.

This family home is set in a lovely private site and is close to all amenities.

There are three large Shopping centres within a few minutes drive. The villages of Blackrock and Douglas are easily accessible by car and bus, as is the City centre.

The Southern ring road system is within 5 minutes drive giving access to Cork Airport (15 mins) and all routes.

Viewing: Highly recommended to the discerning purchaser and strictly by prior appointment with the sole selling agents. Preferably a minimum of one days notice.

Guide Price: Offers in the region of €700,000 are invited for consideration.

Directions:
Right off Blackrock Road by Murphys Service Station and along for 1/4 mile - house is on the right.
Left off Skehard Road at Scallys Supervalu supermarket - house is 1/4 mile along on left.
It is directly across from the Blackrock Hurling & Football Club (The Rockies)